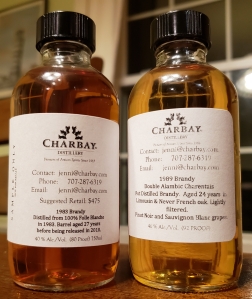 Parting words: The Charbay Distillery is one of the oldest micro-distilleries in the US. It’s best known product is its distinctive line of whiskeys distilled from drinkable ( as opposed to distiller’s) beer sourced from local brewers with hops also usually added after distillation. As one might expect, they’re pretty weird. They are also very expensive, even by micro-distiller standards. The flagship expressions are the 6 y/o Charbay Releases I-V (brewed from a pilsner with hops also added after distillation). Release III sells for $375 per 750 ml bottle at K&L Wine Merchants in Southern California, with IV listed at $500 and V for $650 (the latter two are listed as out of stock). There is also the R5 made from Bear Republic’s Racer 5 IPA (1 y/o, $75) and Whiskey S made from Bear Republic’s Big Bear Stout (2 y/o, $90). They also produce a line of infused vodkas.

I’ve had a couple of the Releases and I didn’t care for them. Long time readers will know that I’m not a fan of funky hops or young, expensive whiskey, so that shouldn’t come as much of a surprise. On November 9, 2018 I saw some folks on Twitter talking about Charbay whiskey and I rattled off a snarky tweet in response: “Charbay is gross, there I said it.” It got a little interaction but I didn’t really think about it much afterwards.

Then on January 13, 2019 I got a response from the distillery asking if I was interested in trying any of their other products since I obviously didn’t like the whiskey. After some back and forth on the tl and in the dms, Jenni of Charbay kindly sent me samples of their two brandies, the Nos. 83 and 89.

No. 83, coincidentally distilled in 1983, was the first thing to ever come out of Charbay’s still. It was distilled twice and aged in Limousin oak for 27 years. It seems to fall into the quirky house style, but I’ll admit that I haven’t had enough 27 y/o brandies to truly make a fair comparison. It’s the most Cognac-like of the two, which should come as no surprise since it’s made from Folle Blanche grapes, one of the historic grape varieties of Cognac. Wood is prominent, but there’s enough herbs and spices to keep No. 83 from being one-dimensional.

No. 89 is a different animal altogether. It was distilled in 1989 from two popular wine grapes, Pinot Noir and Sauvignon Blanc. Pinot Noir brandies are rare but not completely unknown, with fellow Ukiah distiller Germain-Robin producing a celebrated one. Sauvignon Blanc is more rare, but is still not completely unheard of as a source material for brandy. There’s slightly more fruit in 83 than in 89, but there’s still not a lot. What is there is a citric acidity that cuts through the oak to make for an enjoyable special occasion sipper.

I’m not going to do the thing I typically do in the final paragraph of a review and evaluate these on price. These are both special, one of a kind brandies and their prices reflect that. Both are outside of my price-range for any spirits, although I could see myself paying $240 for something exceptional if my wife got a big bonus or promotion or when we become empty-nesters. Nos. 83 and 89 are important pieces of micro-distilling history. If you get a chance to taste them, jump on it! You’ll never taste anything like them again.

One pairing suggestion: If you do pay full price for these bottles or over $50 for a pour in a bar, maybe make a matching donation to your favorite charity or local DSA chapter.