Finish: Silky and a little sweet, with a bite at the end.

Parting words: The Mark Anthony Group has nothing to do with the Roman general or the pop singer, it originated in 1972 as a BC-based wine importer. Its best known product is the (in)famous White Claw sparkling seltzer. Bearface is not Mark Anthony’s only Canadian Whisky. It also owns a brand called Dillon’s, which is not sold in Michigan, and I haven’t seen anywhere else in the US.

“What is elemental aging”? you may ask. As far as I can tell, it’s when they put the finishing casks in unheated storage containers outside and let them sit for a bit. I was a little disappointed to read that. I had hoped that they placed the casks in the woods to encounter actual bears, but alas no.

Bearface smells like a punched up version of Crown Royal (probably because of all the corn) but it’s much more pleasant to drink. Too often finishes are used in an attempt to improve bad whisky. I suspect that’s not the case here, but if it is, the attempt has been successful. $33 is a good price for a Canadian of this age and quality. The packaging is a little corny (oh no a bear attacked the bottle!) but Bearface is recommended.

Parting words: This is a brand new offering from Wiser’s in the US. I’m very glad this and the 35 year old Wiser’s are now available in Michigan, since the Canadian border is more or less closed to booze shoppers like myself.

I’m even gladder that these offerings are at a high ABV. It makes the premium price more palatable, and helps overcome the dull palate and finish that plagues many Canadian Whiskeys, at least the ones that make it to the states.

Bourbon may be overblown and Scotch prices tariffed out of control, but we are living in the golden age of Wiser’s. I can’t think of very many better ways to ring in a new year than with an elegant, perfectly balanced, and relatively affordable aged Canadian whisky like this. Wiser’s 23 is highly recommended.

Thanks to Lisa Wendling and Diageo for the sample.

I’m not a great fan of the regular CR or the special deluxe, but I have enjoyed several of the other expressions, like the Blender’s Mash and Northern Harvest Rye. This is another good one. The French oak (sourced from the Vosges) is not overwhelming and mixes with the classic roasted grain flavors of Canadian whisky to produce pleasant potpourri aromas. Unfortunately, like many Canadian whiskies, the palate doesn’t deliver on the promise of the nose. An extra 5% ABV would probably help in that regard. Still, it’s worth the MSRP, though the Michigan price is pushing it. Crown Royal French Oak Cask Finished is recommended. 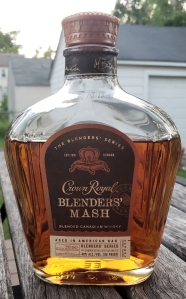 Parting words: CR Blender’s Mash began life as CR Bourbon Mash but Diageo, which never seems to remember that it owns bourbon brands, was forced to change the name due to bourbon’s protected legal status. This decision was right and good, in my not particularly humble opinion. The decision was made after the labels were already printed and affixed to bottles, so if you enjoy collecting things that nobody cares about, try to seek out some of those bottles for your collection.

At any rate, Blender’s Mash is a Canadian blend starring one of CR Deluxe’s constituent whiskies. It has a bourbon-like recipe with 65% corn and 31% rye (malt makes up the rest). The result is a very bourbon-like product. It’s rather mild neat or on the rocks but it mixes surpringly well. It makes great Old Fashioneds and Manhattans. In Coke or in a Boulevardier it gets a little lost, but is still pleasant.

Palate: Full-bodied and round. Creamed corn, burn, a touch of oak.

Mixed: Did well with Ginger ale, on the rocks and in an Old Fashioned.

Parting words: When I was writing this review, I went back to look at my notes on Rich & Rare to compare the two. What I noticed was that I forgot to write the tasting notes and only had the basic information and parting words. I dug into the depths of my tasting notebook and found my R & R notes and I have now updated that post.

Ahem. So, how does it compare? R & R was heavy on the dessert notes, especially vanilla and butterscotch. R & R Reserve is more balanced and has much more rye character and fruit than its cheaper sibling. R & R R is better suited to sipping than R & R, but R & R R mixes just as well or maybe even better. So while R & R is a good value, it’s worth your while to lay down an extra $2.50 for the Reserve.

The bottle is very pretty too, for what it’s worth. R & R Reserve is recommended.

Mixed: Stalk & Barrel Red did very well in all cocktails I tried: Old Fashioned, high ball with ginger ale, Manhattan, Trois Rivières, and a couple of others I don’t remember.

Parting words: Barry Stein and Barry Bernstein (actual names of two different people) founded Stillwaters Distillery, makers of Stalk & Barrel, in 2009. Their first blend was 11+1. It was entirely sourced. It has since been replaced by the Stalk & Barrel Blue (40% ABV) and Red blends which contain a combination of sourced and Stillwaters distillate. Stillwaters may be best known for their highly regarded Stalk & Barrel 100% Malt whisky which sells for $70 at the LCBO ($54 US). They also have a new (I think) 100% Rye whisky which sells for about the same price. Both are entirely made from spirit distilled by Stillwaters.

Red blend’s price is a great one in Canada. Not so much in the US. This is a good weeknight or mixing blend, but it’s not $42 US good. If you can get a bottle at LCBO prices, Stalk & Barrel Red Blend is recommended.

Finish: Creamy and sweet with some heat.

Parting words: While the 8 y/o and 12 y/o expressions of Canadian Club have their own recipes, the 6 y/o and 20 y/o expressions share the same blend. The only difference is age and you can taste it. All the elements of Canadian Club are there but in much more mature form. It’s like seeing a picture of a your significant other in formal attire after looking at a picture of them as a drooling toodler. The spice, oak and sweetness are much better integrated than in baby CC. CC 20 manages to be both flavorful and very drinkable, an impressive feat at 40% ABV.

Like Scotland, Canada’s climate lends itself to long-aging periods for its whiskies. I wish there were more Canadian whiskies in the 20+ year range on the market.

It tastes even better when looking at the price tag. It doesn’t reach the dizzing heights of Wiser’s Legacy or special releases, but it’s better than it needs to be for $47. It blows away similarly priced Crown Royal expressions. If this were available in the states it would be on my regular rotation for sure.  Canadian Club 20 is highly recommended.

Mixed: Did very well mixed. Brings fruit and vanilla to Manhattans, old fashioneds and even eggnogg. I didn’t care for it with ginger ale or on the rocks for that matter.

Parting words: Rich & Rare is a pretty old brand. It was founded in the 1920s by Harry Hatch of the Godderham and Worts distillery in Toronto. G & W stopped distilling whisky in 1950 and R & R was moved to the Hiram Walker plant in Windsor. Sazerac now owns the brand, but chooses not disclose the distiller. It seems reasonable to assume that it’s still being made at Hiram Walker, though.

I was pleasantly surprised at how good R & R was straight and in classic cocktails. In the <$10 category, Canadian blends tend to fall into one of two categories. Either they’re flavorless or have a sappy pungency that resembes burnt creamed corn or kitchen garbage that should have been taken out two days ago. R & R has a bit of that pungency, but it’s kept in check by vanilla and fruit. The result is a wonderful, full-bodied (and cheap) sipping and mixing whisky. H2O is not R & R’s friend, though, causing the whisky to virtually disappear. It can be a little hard to find here in Canadian Club country, but it’s worth picking up. There is also a Rich & Rare Reserve (R & R R) available for $2.50 more in Michigan that I hope to review soon. Rich & Rare is highly recommended.

Mixed: Adds a fruity undertone to Manhattans, perfect Manhattans, and Old Fashioneds. Was also able to stand up to Benedictine when I used it in a Monte Carlo. Be sure to account for high proof if mixing this. It can sneak up on you.

Parting words: Crown Royal gets trashed a lot by whisky enthusiasts, and I think rightly. Crown Royal and Crown Royal Reserve are both garbage. I did like the Crown Royal Northern Harvest Rye, though. It is a solid value, if you enjoy Canadian style rye.

This whisky is closer to Northern Harvest Rye than the standard Crown Royal or the Reserve. The barrels used for these retailer/hand selected barrel CRs are flavoring whiskies. Like Scotch and Irish blends, Canadian blended whiskies are blends of relatively flavorless base whisky with bold flavoring whisky, often but not always made with rye.

Tippins is located on Saline road, on the outskirts of Ann Arbor Michigan. They’re known for good service, good whiskey selections and owner Dominic Aprea’s, uh, let’s say “eccentric” online persona. Aside from an irritating snub on FB, I haven’t had any negative experiences with him, although I have witnessed some strange online behavior from him. At any rate, the man knows how to pick a barrel. As with all CR offerings, the price is high, but $55 isn’t too bad for over 50% ABV. Crown Royal, Tippins Hand Selected Barrel is recommened.

Mixed: Did well mixed but hampered a bit by the proof. Tried it in a Manhattan, 8e Arrondissement, Frontenac and Mammamattawa.

I picked this one up during my last trip to the Windsor, Ontario LCBO (Liquor Control Board of Ontario) stores. The old ten-year-old expression of Centennial was a popular favorite with Canadian whisky lovers. The new NAS version is still popular from what I understand. I had heard good things, but never tried it. I was reluctant because of the low proof, but Centennial packs a lot of flavor into 40% ABV. It’s full of classic Canadian rye aromas with the wheat contributing just enough sweetness to pull it all together. It’s a well balanced but full flavored Canadian rye. Pick one up at your next opportunity. Centennial Limited edition is recommended.