Updated 11/19 to include tasting notes! Sorry! 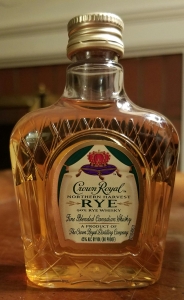 Parting words: Whisky writer Jim Murray proclaimed Crown Royal Northern Harvest Rye his 2015 Whisky of the Year, to much internet snickering and mockery. His announcements are usually met with snark, but in 2015 it seemed to be stronger than usual. Many online whisky heads found it laughable that Murray chose a $30 or so Canadian Whisky from Crown Royal for his big award. The whisky itself got lost in the shuffle.

That whisky is good. It’s not a world beater, but at $32 it doesn’t need to be. It’s unlike Alberta Premium (or its kin). It tastes like something between that and an Kentucky style rye. Sweet, with a little spice and a little herbal aroma on the back.As I said in my last review the days of good rye for cheap is over, largely. Stuff like this is as good as it’s going to get in the near future. Crown Royal Northern Harvest Rye is recommended.