Place of origin: Old Mission Penninsula AVA, Traverse City, Michigan, USA (2013 vintage was made from a mix of estate grapes and grapes from the Rue de Vin vineyard)

Parting words: I don’t think I’ve ever had a Michigan Pinot Gris/Grigio this buttery, certainly not one from Northern Michigan. As you know, dear readers, the butter comes from malolactic fermentation, a secondary fermentation that can happen in wines. It also has the effect of softening out the tartness of a wine. It is commonplace in red wines, but less common in white where it imparts that buttery flavor and aroma most of us associate with California Chardonnay. It is allowed to occur in many warm climate Pinot Grigios too. Traverse City is almost nobody’s idea of a warm climate location but 2012 was a hot year by Michigan standards. Although it can be controlled, malolactic fermentation is more likely to occur naturally in warm conditions so maybe the folks at Hawthorne just decided to allow nature to take its course.

However it happened, the result was good. As in many Chards, the bitter oak and butter complement each other and make it even more food friendly. I’m not sure I would want a steady diet of this style of Grigio, but it’s good for a change of pace. 2012 Hawthorne Pinot Grigio is recommended.

Parting words: Confederation Oak is so named for the old growth Canadian white oak trees that gave their lives to make the barrels that aged this whisky. The Confederation comes in because the trees were over 150 years old when harvested, meaning they were standing when the Canadian Confederation was created in 1867. The makers claim that the Canadian terroir makes a contribution to the taste.

I thought I had reviewed the standard Forty Creek Barrel Select a while back but it turns out I hadn’t. It’s a decent whisky, but it has an off note (similar to spoiled butter) that grows on me in a bad way. It’s not one I’ve found myself going back to. This whisky is a big improvement, as it should be at $44 more in price.

I did not expect this much grain character in a whisky this expensive but it’s not a bad thing here. Like I said above, it’s like a liquid granola bar. Sweet and grainy with a bit of spice, it’s delicious from beginning to end. If I have any gripes with this whisky, you can already probably guess them, dear readers. They are price and proof. At $65, I should be getting more for my money than in the Barrel Select, especially with NAS. Still, this is delicious and I love it. Forty Creek Confederation Oak is recommended.

My home state of Michigan, like sixteen other states, is what is called a “control state”. This means that the state government is directly involved with the sale of liquor in some way. Many of those states operate state-owned liquor stores as a result. Others, like Michigan, merely act as the wholesaler for the state. As a wholesaler, the state of Michigan maintains a list of all the spirits available for purchase from itself. The price book is issued by the state a few times each year. Supplemental lists (now called new items lists) are issued periodically listing items to be added to or deleted from the price book. These lists contain a variety of information but the most important to consumers is the minimum price at which the spirit must be sold at retail.

This post is a look at the new items for May 1, 2016. The LARA website with links to lists in the recent past is here. Caps retained out of laziness but with full names given where the state has abbreviated them. Proof (Michigan lists everything in terms of US proof which= 2 x %ABV), bottle size in ml and retail price are given for each one. I have added notes at the end of each if I think it necessary. Some items are not actually new, but fell off the list for some reason and have been added back or are new bottle sizes for items already on the list. Sometimes an item will be added and removed at the same time. I think this is a way to make corrections, but it’s still puzzling. For the sake of brevity, I have excluded apparent corrections from this post. Some new items are also gift pack versions of existing items. These are always the same price as the bottle alone.

Apologies for the lateness of the post. My wife had a baby.

MAYOR PINGREE-10 YR 110, 750, $89.99 New line of bourbon from Valentine in Ferndale, Michigan. It’s named for former Detroit mayor and Michigan governor Hazen Pingree (1840-1901), a progressive Republican who is widely considered to be one of Detroit’s greatest mayors.

When contacted on social media, Valentine’s Justin Aden wrote the following: “The two new listings are for two new age-stated straight bourbon sku’s we’ll be releasing this summer. One is for cask strength, [non chill-filtered] straight bourbon single barrels and the other is a limited edition age-stated ‘small-batch’ blend by yours truly.” When asked if the bourbon was sourced or their own distillate, Justin replied, “A bit of both, depending on the release. We’ve got several label variations of the Mayor Pingree line. We’ve been laying it down since 2007 but we also have some excellent sourced 10yr stock to share as well. We’ll keep you posted!”

YIPPEE KI YAY 92, 750, $64.99 Yippee ki yay, mother lovers, this new blend of straight rye whiskeys from High West was available just in time for mom’s special day. The proportions of the blend are kept secret (didn’t think this was allowed but whatever) but the two ryes in question are from MGPI of Lawrenceburg, Indiana and Barton-1792 of Bardstown, Kentucky.

The rest of the line arrives this month. As noted previously, the blanco and reposado are made from organically grown agave. Distilled at Agaveros Unidos de Amatitán, 50 miles or so northeast of Guadalajara. They are also partnering with basketball great Bill Walton for some reason.

I received a polite email a few days ago from Mychal Diaz of Southern Champion company, makers of Buzzballz premade cocktails, encouraging me to take a look at their new website and get some more accurate information into your hands, dear readers, regarding their products that were on the New Items list back in February.

Their company is a relatively new one, founded in 2010 by inventor Merrilee Kick of Carrolton, Texas. The company was founded around Kick’s concept for BuzzBallz was for an unbreakable, unspillable quality, full strength premade cocktail for camping, picnics, tailgating, etc. She invented the what the website claims is the first plastic beverage can for this purpose.

Recently they have expanded into spirits with XII Kings Vodka, Andrew Johns Gin (both domestically sourced, filtered, proprietarily processed then cut with Texas water), Pelican Bay Rums (a blend of rums from around the Caribbean) and Crooked Fox blended bourbon (sourced from Kentucky and Tennessee). They are NOT the same spirits used in BuzzBallz. There is also have a wine listed on the website, Closet Freak California Muscat. I asked about additives in their spirits as well but there was no response to that question. They will start rolling out nationwide this summer.

Finish: Sour and a little bitter.

Parting words: Griffin Claw is located in Birmingham, Michigan, the affluent suburb just north of Royal Oak, location of Sipology Blog HQ. Birmingham is a women with big hats and little dogs kinda place. Which makes the quote that appears at the top a little #problematic. It’s a quote from Elmore Leonard: “There are cities that get by on their good looks. Detroit has to work for a living.” I’m sure Leonard meant it as a tribute of sorts, but coming from a brewery in one of the wealthiest, whitest cities in the metro area, it sounds more like a dig than a compliment.

That aside, there’s nothing wrong with this beer. It’s something I would order at the brewpub or someone else if I was in the mood for a spiced wheat beer. This is Michigan, though, and the competition here is fierce. If a brewery is going to make a beer in the style of the most popular beer from the most popular brewery in the state, it needs to stand out. Bluesky doesn’t. It’s not worth seeking out if unavailable near you. Mildly recommended. 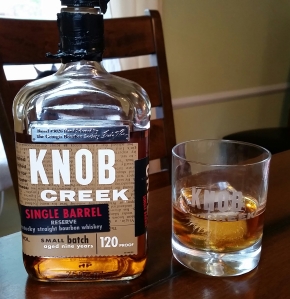 Parting words: Our timing was very poor this Spring. For the first time in years, my wife and I weren’t able to go to Kentucky on the last weekend of April. That was because my wife was due to give birth on April 28. I was excited at the prospect of having my son born at the fabled Gazebo in Bardstown but my wife wasn’t so keen on the idea. So we had to skip this year.

As a result of that and of living over 700 miles from Marietta, Georgia, I didn’t get my bottles of the Georgia Bourbon Society Knob Creek until just a week or so ago. My post about how we selected them has been one of the most popular posts on this blog. It’s here.

This bourbon lives up to its promise. The cinnamon notes I got at the barrel selection aren’t nearly as pronounced now as they were then, but they’re still present. This is a great bottle from a great barrel, if I do say so myself, and the fact that my friends and I helped pick it out makes drinking it an even greater experience. Highly recommended.

Purchased for $13 (Michigan By the Bottle Tasting Room, Royal Oak)

Finish: Semi dry with a tart tingle on the tongue.

Parting words: This is the third Chaos cider I’ve reviewed. Like the other fruit flavored ciders in the line, the unfermented apple cider is combined with a fruit wine base and then fermented together. That process makes it less of a flavored cider than a compound fruit wine.

It was not as sweet and sticky as I expected, but it still has enough weight to hold up to club soda and ice. Cherry Blush is more complex and frankly better than this, but Sweet Blush is still worth a try if you’re in the mood for some light patio drinking. Sweet Peach is recommended.