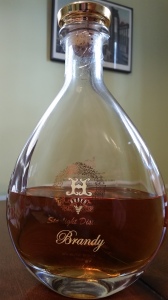 Note: My wife and I received a complimentary tasting and tour and a 10% discount at time of purchase.

Finish: Back to raisins and oak. Not that there’s anything wrong with that. Not at all. Fades a little too quickly though.

Master distiller Lisa Wicker: “You don’t want that one, it’s only distilled once.”

Lisa: [laughs and pours me the reserve]

Having been in the business for so long (by micro distiller standards) means they have the reserves to make a consistently good product and that they do. I emailed Lisa about what sort of cooperage and grapes they use for this product, but I have had no reply as of press time. That’s OK, though. Lisa & Tim are two of the good guys and both very busy individuals.

I hosted a bourbon writer in my house recently and he picked this bottle out of my liquor cabinet as we were sitting down to an after dinner chat and sip. He was very impressed. Since we were on the topic of brandy, I asked him about a brandy micro-distillery that near him in Kentucky that had been getting a lot of press lately. “Their stuff is good,” he said, “but not as good as this.”

So there you have it. This is a very good American brandy at a decent price, one that more than holds its own with brandies big and small. Huber Starlight Distillery Private Reserve Brandy is recommended.