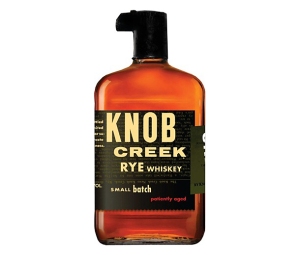 On the palate: Medium bodied with some alcohol bite. Dry with some good but well-balanced rye character.

Parting words: Jim Beam Rye (along with its sister-label, Old Overholt) has long been a whipping boy for American Whiskey enthusiasts. Underwhelming would be the best word for it. It lacks rye character or, frankly, much character at all. Still it has been a big seller in a small (but fast growing) segment. It is available almost everywhere Beam’s bourbons are available.

In 2008 Beam released a new product called Ri1 (Rye One, get it?) in a handsome, modern-looking bottle. The hope was to provide an upscale Beam rye for rye enthusiasts and especially mixologists. The rumor was that more Ris would follow, Ri2, Ri3, Ri4, etc. At this point, it’s probably safe to call Ri1 a flop. The stuff was/is over-priced and underpowered at $47 and 92 proof. No further numbers have been forthcoming either.

Knob Creek Rye is widely perceived as a replacement of sorts for Ri1. Knob Creek bourbon has been a very successful brand for Beam. Many whiskey lovers (like this one) considerit to be the best bourbon made from the Jim Beam mashbill (Beam also makes Old Grand-dad, but uses a different recipe and yeast).

Knob Creek rye is a great improvement on Ri1 and a welcome extention to the Knob Creek line. Like the bourbon, it is 100 proof and comes in an attractive, retro-styled bottle. It lacks an age-statement, but youth is not a problem here. If you enjoy Kentucky-style ryes, then you will probably enjoy this whiskey. It is well-balanced, unlike many of the newer high-rye ryes (a style I enjoyed at first but I am quickly tiring of), and very sippable. The higher proof does it a world of good. It brings out the complexity and spice that get muffled in the 80 proof Beam rye.

One problem Knob Creek Rye shares with Ri1 is the price. When it first arrived in Michigan, it sold for $40 a bottle. I thought it was expensive, but given the proof and the scarcity of rye, it was a fair price (barely). The state minimum price has since been hiked by $5. That pushes it over the edge for me. If you can find it for under $40, I recommend it. If over, leave it on the shelf.