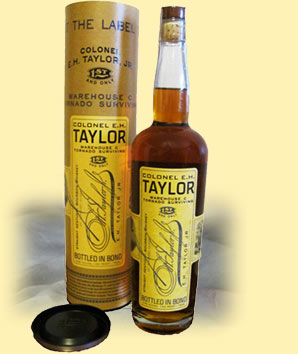 On the palate: Thick and full-bodied. Sweet and luscious, Marshmallows, caramel brownies. With water amaretto, and a hint of spearmint come out.

Finish: Fairly hot, but sweet and pleasant. Intense for a fairly long time.

Parting words: This is another in the already crowded field of Buffalo Trace Col. Taylor releases and it is probably the most popular of the bourbon releases. The “tornado surviving” aspect of it adds some interest (warehouse C was damaged by a tornado a few years back)and I will say that it is much more rounded and complex than the first edition, the old-fashioned sour mash. It is a very much in the BT house style and it is a very good bourbon, embodying the best aspects of the #1 bourbon mashbill.

The problem with the entire Col. Taylor line is the price. Sure it’s easier to find than the Antique collection, but it’s hard to justify paying close to those prices for bourbons without age statements at 100 proof. I can’t give it a non-recomendation because it’s simply very tasty. I can’t summon much enthusiasm for it, though, since it costs more than something like this should on paper. At $20 cheaper, this would be highly recommended. As it is, Col. Taylor Tornado Surviving edition is still recommended.

On the palate: Full-bodied and sweet. Burn, sugar cookies, hint of citrus.

Mixed: Performs well in most cocktails. Excels in mojitos, also works well in Coke and in Cuba Libres. Does surprisingly well in eggnog too, depite the citrus notes in the nose.

Parting words: This is a white rum allegedly in the style of cachaça, a kind of Brazilian rum made from cane juice. I’m not familiar enough with the style to judge how faithful it is to that beverage. However authentic it may or may not be, Olo  is a good mixing rum. It exceeded my expectations in all categories. It’s very affordable and works great in drinks across the board but it lacks the complexity of a sipper. It’s supposedly aged in oak for a period of time but one would never know from the taste and aroma. All things considered, a good mixer at a good price. Olo Silver Rum is recommended.

Neat:  Has a nice spicy, gingery nose with lime and lemon peel. Tart with a little quinine bitterness, but it’s an understated presence.

Mixed: I last tasted this tonic with some Old Tom gin and it was the perfect complement. This is an understated and complex tonic that works very well with understated, quality gins. A lemon slice is the best garnish for a G & T with Fentiman’s. I prefer a spicier tonic, frankly, but Fentiman’s really grew on me. It makes a great change of pace for me, but I can see it being a go-to for many people. This is a high quality tonic and it comes highly recommended.

Nose: Light with dried flowers and a bit of fruit.

On the palate: Full-bodied and fruity. Fried plantains with cracked black pepper, mango, a hint of hoppy bitterness and spice to add balance.

Finish: More bitter than fruity, but works well with the flavors on the palate. Well composed from beginning to end.

Parting words: Like everything MiP does, this a is flavorful but very drinkable. Comes in pint cans like the rest. Sno is a bit pricier, though, $8 (if I recall correctly) for a four pack. Lots of wheat character without being a banana bomb. Sno White is recommended.

Thanks to: Oscar for this sample

Finish: Very dry, old oak, some alcohol and a touch of sweetness.

Parting words: I make no secret of my dislike of old American whiskeys. When even my beloved Four Roses distillery came out with a 17 year old bourbon a couple years ago I was not impressed. The Elijah Craig 18 y/o bourbons I have tasted and enjoyed are few and far between. KBD’s Vintage series of bourbons and ryes are all old whiskeys but have the advantage of being relatively affordable. The downside is that, if KBD got a hold of it, there’s a good chance the distillers didn’t think it was good enough to release under one of their own labels or even blend it into something else. Such is the risk of buying old whiskey from non-distiller producers.

So when Oscar gave me the sample I was skeptical. My skepticism proved to be largely unwarranted. This rye is very drinkable. I’ve had 20 y/o bourbons (from distillery-owned labels) that were not nearly as easy to drink as this. That said, Vintage 23 falls into the curiosity or vatting whiskey category for me. It’s something I might buy one bottle for to use for a tasting or to bring out when whiskey friends are over. Too woody and old to be a classic but interesting enough to warrant some interest. Vintage Rye 23 y/o is recommended.

Appearance: Cloudy gold with lots of floaties in the bottom of the glass.

On the palate: Medium-bodied and a bit lively. Mildly fruity and soft with some bitterness on the tail end.

Finish: Banana, a bit of bitterness.

Parting words: Black Tulip is a pleasant enough beer. It’s tasty and well-balanced, with plenty of wheat character. It’s just not as interesting as I would expect for something at this price point. Black Tulip is mildly recommended.

Parting words: Old Grand-dad is an old brand, one of the classic “Olds”, the others being Crow, Taylor, Forester, Charter, Fitzgerald and a few others. It was one of the brands Beam acquired when they bought out National Distillers in 1987, the purchase which made them into a major player in the spirits world. While Olds Crow and Taylor were changed to the standard Jim Beam yeast and recipe (some might say they even “trashed” those brands), Beam continued to use the same recipe and even the same yeast strain for Old Grand-Dad. Other variables like proof off the still and into the barrel and warehousing did change though.

At any rate, Old Grand-dad’s vital statistics may have changed somewhat, but it is still one of the best bargains and best kept secrets in the bourbon world. For every poseur on a waiting list for Pappy Van Winkle there are 10 cases of Old Grand-dad being purchased and enjoyed by people who know the value of a solid, unpretentious whiskey. Old Grand-Dad BiB is recommended.

On the palate: Medium bodied and velvety. A bit of smoke, but not overpowering. Canned pear, ripe peach, golden delicious apple. Never overly tart or citric, though. Perfectly balanced.

Parting words:  According to the label Pinot Blanc from these vineyards usually gets blended into BSF’s sparkling wines, but the 2011 vintage was so outstanding they decided to bottle it as a varietal. It is a fantastic wine. Elegant and balanced, but never boring. Plenty of terroir tartness, but never overwhelming or pucker-inducing. Dry but highly aromatic and fruity. I just can’t say enough about this wine. It’s a very limited bottling that I received as a member of their wine club. The information that actually came with the package had a different wine listed, but I thank Bacchus that I got this one instead.  Arcturos Pinot Blanc 2011 is worth seeking out and highly recommended.

Appearance: Cloudy burnt orange with an insanely foamy head that took the better part of a half hour to go down enough to be drinkable. Don’t believe me? The picture below is the beer fifteen minutes after being poured into a frosty mug. Still hadn’t poured the whole bottle in. Open and pour over a sink 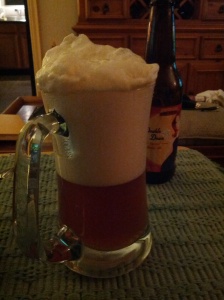 On the palate: Medium bodied. Nice interchange of fruity, malty and bitter.

Finish: Like most of my ex-girlfriends: pleasantly thick and sweet, with a hint of bitterness.

Parting words: Aside from the weird head behavior, this is a very nice beer. In spite of its imperialness it is food friendly and easy to drink. It comes in four packs for $9-$10, but considering the high alcohol content, it’s not that big of a deal. This one might even respond well to bottle aging of a few months. A nice pour. Double Down Imperial Amber Ale is recommended.