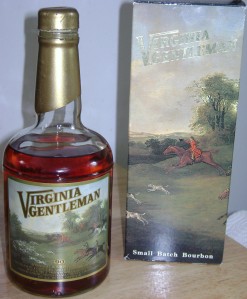 Viriginia Gentleman (VG) is a unique bourbon in a number of ways.  First, it is a great way to win a bar bet.  There is an urban (rural?) legend that bourbon whiskey can only be made in Kentucky.  In fact, it can be made anywhere in the U.S.  Some who will concede that point, instead believe that Kentucky is the only state allowed to put its name on the label of a bourbon.  This, too, is wrong.  So there’s two bets won right there.  It is also, as the label says, distilled both in Kentucky and Virginia.  The A. Smith Bowman distillery is now owned by Sazerac, who also owns the Buffalo Trace distillery in Frankfort, KY.  Bowman takes unaged proto-bourbon from BT and redistills it in their copper pot still (maybe, the info is a bit muddled here), then barrels, ages and bottles it.

VG was already of rather limited distribution (Virginia and surrounding states and districts) when it was announced last year that it would be discontinued.  It has been replaced by John J. Bowman Single Barrel bourbon, which is only for sale at state-run liquor stores in Virginia.  I think it’s a shame that such a long-time, refreshing, summertime sipper like this one has been discontinued, but luckily I have a sister in DC, so I do have a source for the new stuff, which is pretty good, and maintains the tradition of having a beautiful bottle.  The 90 proof VG has been nicknamed “The Fox”, since the label features a beautiful painting of a fox hunt, and the logo on the back is a fox head and the letters VG.

The nose is delicate for a bourbon.  To me it smells like a freshly sliced granny smith apple, one that has been rolled in cinnamon and sugar.  On the palate, it’s almost creamy.  It has a medium-light body and the apple has been replaced by caramel, but the hot cinnamon is still there too.  Wood finally shows its face in the finish, which wraps everything together very nicely.  In the end, I feel refreshed, but dangerously so.  It’s great in mint juleps and manhattans as well.

VG is gentlemanly to be sure, but before you know it, you’ve spent a little too much time with him and you wake up wondering how you ended up in his rose garden next to his maid and whatever happened to your pants.  To me, nothing says summer like VG.