…can be found here at John Hansell’s blog:

I’m not sure how well a 6 y/o bourbon, 6 grains or not, works as a “super-premium, small-batch” product, or if we will ever see it on American shores, but there ya’ go. 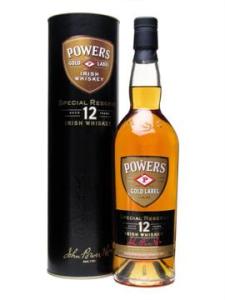 I drink very little Scotch, but I drink even less Irish whiskey.  This is because most of the Irish I’ve tasted has been really, really boring.  But, encouraged by positive reviews of a few Irish whiskeys in my first issue of Malt Advocate a few months ago, I’ve decided to branch out.

I picked up a bottle of this a few weeks ago, as the beginning of a spot in my rotation for finer Irish Whiskeys.  I’ve had the standard Powers Gold Label before and while it does have some character, it was still very dull and had a nasty grain whiskey aftertaste.  Powers is made a the same distillery as Jameson, Midleton, Redbreast and Paddy’s.

The extra years in the barrel have greatly improved this Powers.  I drank it with one ice cube, and now I’m doing it again.  There is a LOT of bourbon in the nose, but of course I think this is a very good thing.  Behind the bourbon is a nice fruitiness, lots of mango and buttery papaya.  It’s complemented by a bit of toffee.

On the palate the toffee jumps out at first, then it’s followed by more mango and some mandarin orange and a nice bit of burn (shocking in an Irish).  The finish is surprisingly dry, with a parting glance from the mango.  Another light, but flavorful, summer sipper.

Powers 12 only became available in the U.S. this year.  I hope it sticks around, because it’s not doing a very good job sticking around my house.