Big thanks to Mike Matsumoto for letting me borrow his bottle!

Parting words: Peerless is a micro-distillery that has revived an old Henderson, Kentucky (west of Owensboro) bourbon brand. Founders Corky Taylor and his son Carson are descendents of the Kraver family who originally owned that brand and distillery. The orignal distillery shut down during World War I, never to reopen. When Corky and Carson decided to revive the brand, they acquired the name and the old DSP number (50) and an old building in Louisville to put their new distillery in.

The story is similar to many others and one might expect Peerless to be putting out sharp, small barrel whiskey or weird gin or “craft vodka” or whatnot. They’re not doing that. They’re doing it the right way. Their rye was released in 2017 and was delicious. Their first release of bourbon was earlier this month, July 2019. My pal Mike was on the guest list for the intial bourbon release and he graciously allowed me to borrow his bottle and take samples for blogging purposes.

I’m very glad he did. This is easily one of the best micro-distilled bourbon’s I’ve ever had. The down side to doing it the right way is that the product ends up being expensive. The rye has a Michigan state minimum price of $118 (it is barrel proof, though) and this bourbon is $70 at the distillery, which is less, but still high for a four year old, even at barrel strength. It is mature beyond its years, though, and if I had an opportunity to buy a full bottle myself, I probably would. The price alone is what keeps it out of highly recommended territory for me. As it is, Peerless Kentucky Straight Bourbon Whiskey is recommended. 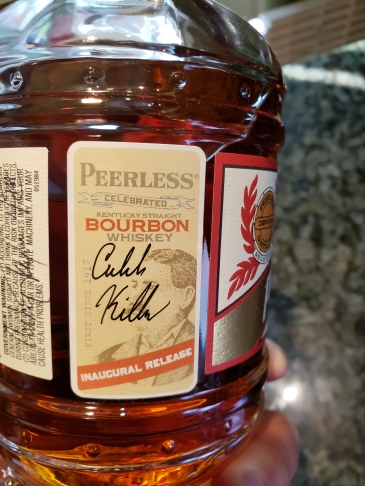