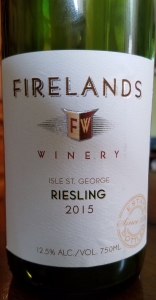 Finish: Light. Pinch of thyme, lingering sweetness in the cheeks.

Parting words: Isle St. George, AKA North Bass Island is a part of the Lake Erie Islands archepeligo, which includes the other Bass Islands and Pelee Island, among many others. Pelee is by far the largest. North Bass Island is the fifth largest at just over 1,000 square miles. It is (barely) inhabited but much of the island is given over to parks and vineyards. Like its Canadian cousin, Isle St. Geoge’s climate is moderated by Lake Erie and for that reason is a prime location for vineyards.

Firelands is the “vanguard” winery of the Lonz group, which owns other Ohio wineries and wine brands. Firelands claims to be the largest winery in Ohio (by what measure is unclear) and they produce a full line of the usual cool climate varietals, sparklers and dessert wines.

When I bought this wine, I also bought a bottle of their 2012 Pinot Noir, which I did not like at all. It was musty and tired, though in its defense it may not have been stored properly. I was apprehensive when opening this Riesling. There was some initial mustiness on the nose, similar to what I get in many Oregon Rieslings, but it dissapated within a few minutes. It was crisp and fruity with an odd but pleasant squirt of tropical punch on the back end of the palate. $12.50 was a fair price, but the website lists the current vintage at $11, which is even fairer. Firelands Riesling is recommended.