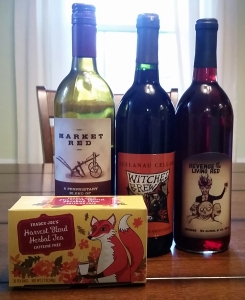 HM: Sweet with cinnamon and orange.

WB: Easy Drinking. Sweet cherries, cinnamon. Not much else.

LR: Spicy with a little orange zest and cherry.

HM: Smells sweet but tastes dry. Good once you get used to it.

LR: Drier. Finish burns. Don’t like it too much.

Parting words: I had wanted to do a mulled wine tasting for a while, but having three bottles open at the same time is a bit much, even for me. Normally Mrs. Sipology Blog would help out but she’s currently very knocked up so I invited friends of the blog Amy and Pete over to help.

For the homemade mulled wine, I had used TJ’s Harvest Blend Herbal Tea for mulled cider back in the fall with very good results so I thought I’d try it with wine. I thought it was OK, but not as good as the two pre-mulled wines. I kept adding more sugar which made it better but still not good enough. Next fall maybe I’ll start work on perfecting a mulled wine recipe. My own creation is not recommended.

Witches Brew is a big seller for Leelanau Cellars (known for their seasonal table wines) and it floods into grocery stores statewide in September and lingers well into the winter. The Halloween theme has always been a little puzzling to me, since I associate mulled wine with the Christmas and New Year’s holidays. Pete assured me that he and many other people do associate mulled wine with the fall hayride season. At any rate, cinnamon is the dominant flavor, but clove and nutmeg also go into the brew. It has it’s share of haters, but I think it’s a decent buy for the right price (<$8). It’s NV so beware of overly dusty bottles, but they drink fine at a year or a little more after hitting the shelves. Recommended.

Sandhill Crane’s goes with a hipper zombie theme. Their original spiced wine was Night of the Living Red ($17 from the winery). According to the website it’s made with “cloves, cinnamon, nutmeg, vanilla, orange peel… and essence of fresh-squeezed zombies!” Revenge is infused with all those (including the zombie juice) plus estate grown chiles. The chiles add a nice shot of heat to the wine and set it apart from products like Witches Brew. Some, like Amy, may find this off-putting but I loved it. It’s $10 or more than WB but the taste is worth it, plus $2 from every Living Red bottle sold goes toward the college fund of the artist who created the label. That’s added value. Revenge of the Living Red is recommended.