Have you ever selected your own barrel of bourbon? I have a few times. Well, me along with a dozen or two of my drinking buddies. I’m a member of the Georgia Bourbon Society, a group that selects a barrel or two of bourbon for ourselves once or twice a year. No, you don’t have to be from Georgia to be a member, obviously. It’s just a group of friends from all over the country, organized by two men who live in Atlanta.

There are dozens of groups like the GBS around the country. Some are ad hoc groups, some are loose affiliations like us and some are organized clubs with rules and membership rolls and whatnot. This sort of thing has been going on for a long time, but it has become much more common as bourbon’s popularity has taken off.

GBS has made the rounds over the years. Our first selections were of Elijah Craig and Elijah Craig barrel strength. Our next one was Elmer T. Lee, then two barrels from Four Roses, then a Russell’s Reserve Single Barrel from Wild Turkey. Last weekend we selected a barrel of Knob Creek Single Barrel at Jim Beam. It was a great experience.

We gathered at the Jim Beam American Stillhouse (aka the gift shop) in Clermont, Kentucky at 10 AM that morning. First on the agenda was, of course, the tasting and selection. We gathered in Warehouse K amongst the barrels. 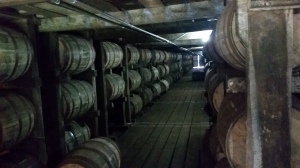 There were tables set up with four glasses each, one with a red band, one with a green band, one with a blue band and one with no band at all. A glass water bottle was on each table too. Three barrels had been rolled out for us to choose from, each one corresponding to a colored band. Red was first, green second and blue third. We sniffed and tasted all three in turn and then over again and then took a secret ballot. Just one vote separated the first and second places so we considered a taste off, but in the end we just went with the first place finisher. I thought it tasted and smelled like snickerdoodle cookies. It was a very good barrel of bourbon.

The winning barrel was then rolled on to a truck and driven over to the distillery for dumping. Some of our members had the privilege of aiding in the dumping process. We then all watched and waited to see how much bourbon was going to come out of that barrel. About 33 gallons is the answer (that’s about 20 gallons lost to evaporation over the ten years of the bourbon’s life). 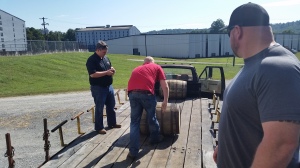 After a delicious complimentary bbq lunch, we got a full tour and then the unheard of (at least unheard of by me) experience of actually watching our barrel get bottled and packed. We were able to follow the bottles all the way down the line to the end, where we got to pack them into cases ourselves.

We then had the opportunity to buy a bottle then and there through the gift shop, at a higher price, of course. There were five bottles left over after all the cases were filled, so five of us stepped up to buy one. My friend Amy, also a GBS member, had requested a bottle so the one I purchased was on her behalf. Those of us buying bottles then had the opportunity to apply the wax seal to the bottles ourselves! Waxing is a multi-step process. The following four pictures were taken by S. Ivancic.

The whole experience was wonderful and far exceeded my expectations. Some of the participants thought it was all a little too long but I loved every minute of it. We picked a damned good barrel too. I can’t wait until I get my bottles!

If you have an opportunity to select a barrel from Beam, I highly recommend it.

12 thoughts on “Picking a barrel of Knob Creek: A photo essay”