Palate: Sweet and hot, but rounded. Rock candy and oak. Opens up but weakens with water. Butterscotch candy, tarragon, touch of char.

Parting words: Booker’s was created by and named after Booker Noe, grandson of Jim Beam and father of Fred Noe, current Beam brand ambassador. According to marketing materials, this is how Booker drank his bourbon: uncut and at 6-8 y/o.

Booker’s was one of the first high-end bourbons I ever tasted and it was one of my favorites back then. I’ve had it a few other times over the years and it’s always been one I’ve enjoyed. This one doesn’t seem as good as ones I’ve had in the past. It has more of the less desirable aspects of the Beam character than  past bottles, especially with water added.

I’m not sure if it’s worth the price, especially considering that Knob Creek Single Barrel at 120 proof is only $46 and Baker’s is $47 at a lower proof and higher age. I’m not sure if a few more proof points and a pine box (perfect for Halloween) is worth the extra scratch. Still, it tastes good and that’s the most important thing, right? Booker’s is recommended.

Parting words: Although what’s now Eastern Turkey was probably the birthplace of wine (according to archaeology and even the book of Genesis), Turkey’s first commercial vineyard was founded in 1925 at the behest of president Ataturk. There are still a number of state-run vineyards and Turkey is one of the world’s largest producers of grapes but little of that output makes it to the U.S.

Kavalidere’s Öküzgözü of Elazig is one of the few labels that makes it to this side of the pond. When I first opened this bottle it was vile. Moldy cardboard nose and thin. I thought it may have been tainted but I’m always reluctant to take bottles that I bought on sale back to the store. After being open for an hour, it seemed to improve slightly, so I just capped it and waited until the last day. It is dowright drinkable now, but still with a slightly musty aroma. It does fine as a dryish weeknight table wine, but I wouldn’t pay over $11 for it. Of course vintages vary, as always. Kavalidere 2010 Öküzgözü d’Elazig is mildly recommended.

Finish: Lightly roasted malt with a nice hit of hoppy bitterness on the back end.

Parting words: I know Oktoberfest season is coming to an end, but I’m a slow beer drinker. This beer is a fine example of the style and is very food friendly, as it should be. Went well with fromage fort, pretzels with mustard and even pecan wood smoked baby back ribs. The price could be lower, but it’s a tasty seasonal beer and I’m a big fan of craft pint cans. Rochester Mills Celebration Lager is recommended.

Parting words: Wiser’s Legacy is the legacy of now retired master blender David Doyle. Wiser’s Legacy is back in the U.S. after two year long absence. Named 2013 Canadian Whisky of the Year by Whisky Advocate, it’s a remarkable product.

It’s made from a blend of rye, malted rye and maltly barely and has loads of minty Canadian rye aromas (think early batches of Whistle Pig) that are elegantly balanced with candy sweetness and toasted barrel notes. It manages to be both unabashedly Canadian and a transcendent, world class-whisky on par with bourbons twice its price and single malt Scotches four times the price. I taste something new every time I pour myself a couple ounces.

Nobody knows how long it will be back on American shelves, so buy a bottle or two while you can. Wiser’s Legacy is highly recommended.

Finish: Sweet and a little hot. Lingers for quite some time.

Mixed: Works well in a G & T, but go easy on it. Does very well in a dry martini but again, remember it’s navy strength.

Parting words: I’ve never had a bad Hayman’s gin and this is one is no exception. It’s juniper-forward like a typical London dry gin, but very well balanced on the back end with sweetness and earthiness. It does very well in cocktails even if it’s not particularly ambitious. If that sounds like a back-handed compliment, it’s not intended to be. The folks at Hayman know what they’re doing (they’ve been doing it long enough) and they have made an elegant, perfectly balanced gin that does very well in all applications, including neat (or at least with some water).

That elegance along with its high proof and low price make Royal Dock highly recommended.

Parting words: Lily’s is one of Downtown Royal Oak’s best regarded and longest operating restaurants. It’s named after Lily Strange, grandmother of the restaurant’s founders. Lily was born and raised in Scotland so the place has a vaguely Scottish theme.  In addition to serving great seafood (and other stuff), Lily’s is also a brew pub with consistently good beer. It’s a testament to how good that beer actually is it thrives in an area saturated with brewpubs and bars selling craft beer. In addition to this stout, they also make a light lager, hefeweizen, red ale and at least two seasonal offerings.

Strange Stout is a very good example of the style and the smoky finish adds and nice extra dimension not usually found in the competition. Don’t look for something to rival stouts from Bell’s or Founder’s, but this is a solid brewpub stout. Strange Stout is recommended.

Palate: Full bodied, the syrup in that can of Bartlett pears, orange juice from concentrate, pinch of thyme.

Finish: A long lingering sweetness all over the mouth accompanied by a hint of golden apple.

Parting words: The Niagara Peninsula VQA is a blanket appellation for any wine produced in the Niagara municipal region in Southern Ontario. This area is bordered by Lake Erie to the south, Lake Ontario to the north, the Niagara River to the east and the city of Hamilton to the west. The region includes several sub-regions, including Niagara Escarpment, Niagara-on-the-Lake and their subdivisions.

Having water on three sides creates a micro-climate favorable for the growing of grapes, as one might expect. The climate remains Canadian, so early and late frosts and freezes are a constant concern. This is a problem for most types of wine production, but not for the production of ice wine, a style that Canada does very well across the board.

Picking the grapes while they are frozen concentrates the sugars like “noble rot” or the straw wine process does, resulting in a thick, sweet, aromatic (and expensive) dessert wine. In Canada and the northern U.S., the hybrid grape Vidal is often used alongside the more traditional Riesling. Vidal is used for its hardiness and ability to produce wines with high acidity and sugar levels in cold climates.

This one is a good example of a Canadian Vidal ice wine. It’s thick and rich but not flabby. The approachable pear and citrus flavors make it a good introduction to the style, as does the relatively low price. Jackson-Triggs 2011 Vidal Ice Wine Reserve is recommended. 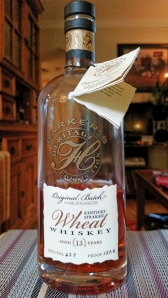 Finish: Pretty hot with lots of oak and a touch of sweetness. Lingers for a very long time.

Parting words: Heaven Hill’s Bernheim Original is the world’s best selling straight wheat whiskey. I can say that with confidence because it’s also the only straight wheat whiskey produced by a major American distiller. To almost everyone’s surprise, they added an age statement recently and those bottles are now hitting the shelves.

An even bigger surprise was when it was announced that the 2014 edition of the PHC was going to be a wheat whiskey. Many mistakenly assumed that it was going to be another wheat bourbon, but that’s not what this is. It’s a wheat whiskey, meaning that it is made from a mashbill containing at least 51% wheat, the rest being corn and malted barley. It is required to meet all the legal requirements for straight ryes or bourbons, only with wheat in the place of rye or corn.

I came in expecting a very dry, subtle whiskey along the lines of Bernheim Original but oakier. I didn’t expect such a lush, sexy whiskey. It has a round voluptuousness that I associate more with Four Roses or older Van Winkle bottles than I do with Heaven Hill (as much as I love HH). Bottling at barrel proof and not chill filtering were the right choices to make for this one, but when aren’t they the right choices? It’s hard to compare this to anything else, but I think it’s the best in the Parker’s Heritage Series since 2010’s Wheat Bourbon edition. It also fits easily into my personal top twenty list.

I got a good deal on mine, but even at $100-$120 Parker’s Heritage Original Cask Strength Kentucky Straight Wheat Whiskey (full name) is highly recommended.

If you want a second opinion, consider this: I brought a full bottle of this to the table at a recent gathering of some of the most obsessive and discerning American whiskey enthusiasts in the country. It shared the table with dusties from Wild Turkey’s golden age, Four Roses limited editions, Stitzel-Weller products and dozens of bottles of that caliber. After an hour or so I had to hide it under a chair because it was already half empty. That says it all.