Appearance: Like water, but with long, slow, sticky legs.

On the palate: Full-bodied and dry. Hot curry and a cucumber salad.

Mixed: Does OK with tonic and in a Tom Collins, but some of the finer points are lost and the tonic clashes with it a bit. Shines in a very dry martini, complementing the herbal flavors in the vermouth beautifully.

Parting words: Hendrick’s is a very well regarded gin, and I can see why. It’s very ggod, but it is not something I would reach for if I wanted a quick, relaxing G & T; it’s a martini (or neat) gin and does best in that application. The bottle is also good looking, with the design of an antique medicine bottle. Hendrick’s is fairly priced for what it is at $36 (state minimum) here in Michigan. It is recommended.

Finish: Long and bitter. Like finishing a cup of French Roast.

Parting words: This beer delivers on the promise of the name. It’s like a dark roast coffee with a bowl of breakfast cereal in stout form. It’s rich in flavor and certainly potent at over 8% ABV, but not excessively boozey either. Goes well with a rich, cheesy meal or as just a meal in itself. One of Founder’s (and Michigan’s) best beers. Breakfast Stout is highly recommended.

Thanks: to the Rhoades for splitting this bottle with me.

Note: Apologies for the short review. This review was originally intended to be half of a head to head review, but I thought it would work better as a stand alone.

On the palate: Full bodied and soft. Sweet and a little fruity. Grape bubble gum with a sharp hit of Serrano chili at the end.

Finish: Sweet and corny like a beloved uncle. The sweetness coats the mouth and lingers for a long time mingled with a little burn.

Parting words: The Colorado Straight Bourbon from Peach Street Distillers is VERY young, at just over two years old. It tastes like it too. The heavy body, corniness and fruit are all typical characteristics of young bourbons but it does show a lot of potential for long aging. Sweet, fruity stuff like this usually ages very well.

In its current state, it is high quality young bourbon. It goes down easy, as long as you don’t choke on the price. Expect to pay well over $50 per 750 ml bottle. Still, it’s good and I can’t say it isn’t. Colorado Straight Bourbon is mildly recommended.

Finish: slightly tangy, but with some cedar in the background.

Parting words: Chambourcin is a hybrid grape that is pretty widely planted around Eastern North America. It was developed by hybrid guru Joannes Seyve and became available to planters first in the 1960s. Its advantages are its disease resistance and a lack of foxiness. It is an ancestor of the increasingly popular Regent grape. It ages well too, or at least this one did.

This stuff was all over the place in a very unpleasant way during the first hour after I opened it . After it sat in the fridge with a stopper on for 2-3 hours it settled down into a good, very food friendly wine. It’s not incredibly complex but it has a slightly rustic character that keeps things fun. My only criticism is that it is slightly over-oaked. Less oak and more fruit might have put it into the highly recommended category. Overall it’s a good effort, though. Butler Limited Edition Indiana Chambourcin, 2009 vintage, is recommended.

1) Straw with a light copper tinge.

1) Medium bodied and very sweet. Some alcoholic burn, but mostly sweetness with a bit of a fennel note in the background.

2) Fuller bodied. More sophisticated, but also a bit dull. Drier, some wood and cola sweetness with a bit of cocoa and allspice.

2) Some wood, but not overwhelming. Cinnamon, a bit of smoke, and more cola.

Why review whiskies like these? Everybody knows what they taste like, right? Whether they do or don’t, it’s important to me to get a grip on products like this as a taster. It’s the same reason I reviewed Jack Daniels and Jim Beam White label. I need a baseline or a benchmark or something like that. It’s hard to judge a blend without knowing what the world tastes when it orders a blended Scotch.

Recently I, as a (part-time) whiskey blogger, have been urged to take up the banner and “give Maker’s Mark shit” for lowering the proof of their bourbon. I’m not going to do that. The decision to lower the proof of Maker’s is unfortunate and disappointing, but the level of internet outrage regarding the proof change is completely out of proportion, surpassing even the Ebay/Pappy hysteria of 2012. I have no desire to contribute to this silliness any more than I already have.

Instead, I’m going to call attention to something much  more worthy of getting upset about: The death of A. Smith Bowman Master Distiller Truman Cox.

I didn’t know Truman very well. We were Facebook friends and I only recall meeting him once in person. He was the kind of guy who would greet you with a hearty handshake and a smile. As a friend of mine said, he was above all a genuine guy. He loved his family and he seemed to enjoy life immensely.

He was also a whiskey man through and through.  His prior position was at Buffalo Trace as chief chemist. He became Master Distiller at Bowman at a crucial time, as Bowman had recently moved to a new location, had a relatively new owner, Sazerac (also owner of Buffalo Trace), and was in the midst of a profound transformation. 10 years ago, Bowman was little more than a curiosity. It was the only large-ish bourbon distillery still operating in the state of Virginia and had only one (fairly) widely distributed brand, Virginia Gentleman. It came in 80 and 90 proof expressions.

When Truman moved to Virginia, the transformation of Bowman was well underway. The 90 proof VG had been replaced by Bowman Brothers Small Batch Bourbon at 90 proof  and a 100 proof single barrel bourbon, John J. Bowman, was also introduced (review coming soon). Also made are Abraham Bowman Rye (I review the TPS barrel-stength version here) and Sunset Hills Gin. Under the brief period of Truman’s leadership the transformation of Bowman was completed, and Bowman began putting out some of the most highly regarded and sought after private bottlings of bourbons and ryes among enthusiasts. They were able to have the best of both worlds. They operated like a micro-distillery in many ways, but they were also able to draw upon the resources of a large spirits company like Sazerac and a large distillery like Buffalo Trace.

Truman was one of the brightest rising stars in the world of American whiskey and his sudden death is a great loss for the industry and bourbon drinkers alike. Here are some links:

Here’s hoping he gets that bottle named after him at last. 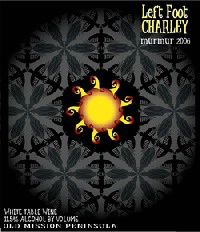 Appearance: Light gold with not much in the way of legs.

On the palate: full bodied and crisp. pear, tangerine, peach.

Parting words: According to the LFC website, the grapes that go into Murmur change from vintage to vintage. The 2010 vintage was intended as an homage to the easier-drinking vintages of Vouvray. It does very well in that regard. LFC has done a very good job of blending hybrids with the Riesling and Chard to create that effect.

Murmur is fruity and a bit tart, but with enough body and aroma to keep things interesting. They recommend this wine be consumed young and in the summer time. I didn’t exactly follow that recommendation, but I can tell you that it tastes pretty good at 2+ y/o in the middle of winter. It works fine with a meal but might work better as a before dinner wine or with a cheese course. Murmur 2010 is recommended.

As a part of our winter series on bonded spirits, in this episode we will be comparing three bottles of the same bourbon, Old Fitzgerald, Bottled-in-Bond. Two are from the same distillery (presumably). Special thanks to White Dog & Tommyboy for giving me these bottles (yes they were gifts, those guys are both outstanding individuals).

All three are 100 proof wheated straight bourbons with no age statement (NAS). 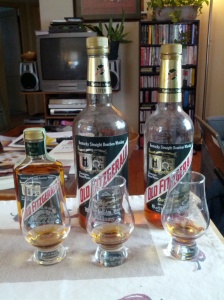 2) Darker, with similar legs and necklace.

3) Medium bodied and even drier. Dry oak, a bit of caramel corn and mint.

1) Sweet and hot. Seems to get drier as the finish goes on. A bit of oak, then fading back into caramel corn.

2) Woody. The wood lingers for a long, long time with pralines in the background.

3) Pretty hot and minty with touches of oak, eventually settling down into a caramel sweetness.

I’ve been wanting to try this line up for a long time. A few things interesting things arose in this tasting. First was how much oakier the later Stitzel-Weller bottle was than the earlier one. The logical explanation for that would be that the bourbon going into the later one was older than that going into the earlier one. Why the maker would do that is a puzzle. Perhaps the infamous whiskey glut was reaching a climax when bottle 2 was filled? Bottles labeled with “Bottled-in-Bond” have to be filled with spirit from the same distillery and the same distilling season. So another explanation for the greater wood influence could be a series of hot summers during the aging period for that batch of whiskey.

Another interesting phenomenon was how minty bottle #3 got as the tasting went on. #1 had an herbal note at first, but that went away within a few minutes. That mint is considered one of the signature notes for the Heaven Hill stable of bourbons. Bottle#3 has convinced me that Heaven Hill, the current distiller of Old Fitzgerald, is now using its own house yeast strain in its manufacture. They are clearly not using Stitzel-Weller yeast or the “Schenley yeast” master distiller Parker Beam reported finding at DSP KY 1 when Heaven Hill took it over.

Finally, while differences certainly showed up between the three, I was surprised at how similar they all were too each other. There was none of the sweet vanilla in #1 & #2 that many of us who are accustomed  to drinking our Stitzel-Weller from bottles labeled “Van Winkle” might expect. Aside from the minty finish on bottle #3, I doubt I could distinguish any of these from each other in a blind tasting. Not to say #3 is the equal of #1 or #2; it’s not. But they are all middle to lower shelf wheated bourbons and they all perform that role well.

Old Fitzgerald, Bottled-in-Bond, whatever the distiller, is recommended.