Place of origin: Maryland, USA (Northern Maryland according to back label)

Finish: Chewy with a little fruit.

Parting words: New Windsor is a historic small town in Maryland, about 25 miles northwest of Owings Mills. It’s known for its hot springs and the presence of a Church of the Brethren mission center.

Andrew Stover, the sommelier behind the Somm Cuvée is based in DC currently but is from Grand Rapids, Michigan. He is also the founder of Vino50 selections, a wine wholesaler that specializes in “regional” American wines.

I enjoyed this wine, but it was a little high in pyrazine (bell pepper aroma) for my taste when drinking solo. I don’t mind little bit of that aroma, but I expected something a little more refined in a wine this expensive and this rare. That said, it did pair very nicely with quinoa and lamb chops and homemade pork and beans. Maybe it just needed more time in the bottle. That might mean less fruit, unfortunately. So, I don’t know what exactly to tell you to do with this wine. Anyway, due to the relatively high price, I’m going to give this vintage at this time a mild recommendation. 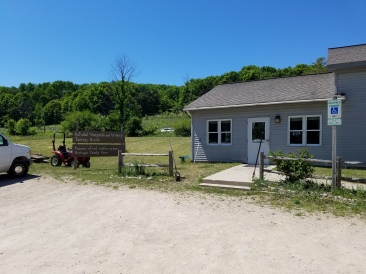 The old Raftshol barn and silo.

On Saturday, June 9, Liz and I headed up to Traverse City, Michigan for the fourth City of Riesling Festival (For my review of the first, click here). We had a great time. We drank wine, we walked on the beach, we drank more wine, we learned about wine. On Sunday we also visited Good Harbor and Chateau Fontaine wineries and drank and bought wine.

On Monday we had one more wine stop: Nathaniel Rose winery at Raftshol Vineyards. Nathaniel Rose has been running his own winemaking business since 2010 operating out of whichever winery he was working at the time, starting at Raftshol and ending up at Brengman Brothers, with several in between. Last year, he purchased Raftshol Vineyards in Suttons Bay in Leelanau and is now using it as his HQ (and homestead!).

The tasting room with its awards, photos and piano. 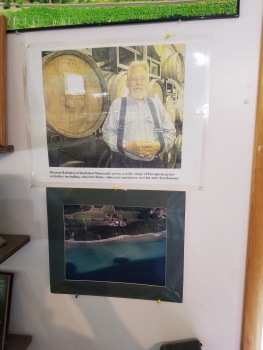 Raftshol is one of the oldest wineries and vineyards in Leelanau. It began at the turn of the last century as the dairy farm of Anders Raftshol. In 1930 the cows left home and the farm was converted to a cherry orchard. In 1975 the cherry business was bad so the trees had to go. Sometime after that, hybrid grape vines were planted. Anders’ grandsons, Warren and Curtis were not happy with the results so in 1985 they planted vinifera instead, being the first commercial vineyard on Leelanau to do so. Instead of the usual practice of grafting vinifera vines onto native rootstock, they grafted them onto the existing hybrid ones. Rose believes this unusual set up may contribute to the high quality of the fruit produced by the estate. When Warren decided to sell last year, Rose jumped at the chance to own some of the oldest vinifera vines in the state, including Cabernet Sauvignon. According to Rose, the vineyards had been neglected for the past ten years, but he’s in the process of whipping them back into shape using careful pruning.

Nathaniel behind the bar.

Liz in front of it, tasting the orange Marsanne.

Nathaniel Rose’s namesake project is mostly about making quality, single-vineyard red wines. They are currently sourced from vineyards in the Lake Michigan Shore AVA and almost entirely red except for an orange Marsanne and a dry Traminette (we bought a bottle of Traminette for $13 minus trade discount). Rose has worked at nine different wineries in various capacities over the years, including Raftshol and Brengman Brothers, which he operated out of until purchasing Raftshol. His extensive knowledge, experience and contacts in the Michigan wine industry allow him to get quality fruit from quality vineyards. His wines There may also be a Chardonnay in the works, but Rose says he doesn’t really have the proper equipment for whites at the moment. 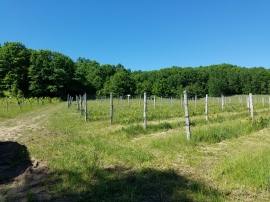 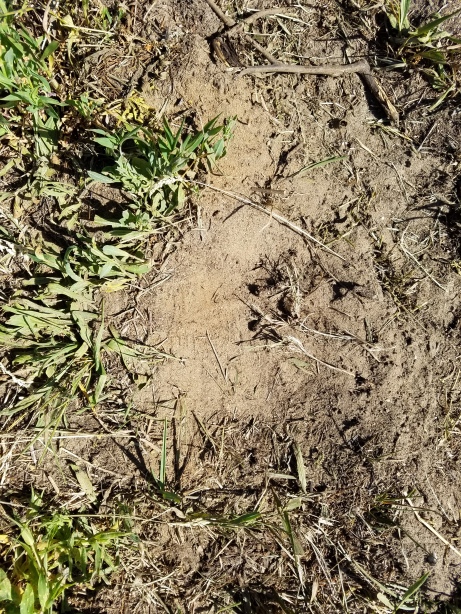 Everything we tasted there was wonderful, but my favorites were his excellent Syrahs (we purchased a bottle of the single barrel #4 Syrah at $85 minus trade discount). They were the best Michigan Syrahs I’ve tasted and maybe the best Michigan reds I’ve tried overall. For the single barrel, Rose was aiming for a wine reminiscent of Côte-Rôtie in the northern Rhône valley, so he cofermented the Syrah with Viognier. When we were tasting, he helpfully provided a bottle of Côte-Rôtie for comparison and the two wines were indeed very close and I would be hard pressed to say which I liked better.

Back labels featuring actual photo of Nathaniel performing a feat of strength.

His signature wines are his Cabernet Sauvignon blends, Left Bank and Right Bank. They were both very good. Rose is rightfully very proud of these, especially the Left Bank. He loves to tell the story of the tasting he attended with several sommeliers (including  Master somm Brett Davis), winemakers, writers and other experts in which his 2012 Left Bank Blend went up against a group of Second Growth Bordeaux and cult California Cabs, including Cardinale (~$270), Ridge Monte Bello (~$250), and Jos. Phelps Insignia (~$190), all of the 2012 vintage. Left Bank won. None of the experts could pick Left Bank out of the lineup blind and tasters could not tell the difference between it and the 2012 Cardinale Cab at all. In fact, they belived they had mistakenly been poured the same wine twice. Rose believes that Northern Michigan and his new vineyard in particular (which is not the source of Left Bank) has a climate that is very similar to high elevation viticultural areas in California and is capable of producing reds of the same high quality.

Left Bank sells for $150 (we also purchased a bottle of this at a trade discount) which puts it at or near the top of the price range for Michigan wines, even higher than wineries like Brys Estate or Mari Vineyards. When I asked him if he thinks consumers will be willing to pay that much for Michigan wines, regardless of quality, he responded with a few points. First, that his wines are plainly worth the money as tastings like the ones he’s entered Left Bank into prove. Second, that he’s had no trouble selling any of his wines so far. Finally, he pointed out that, while he is selling it at the Raftshol tasting room, the primary purpose of a wine like Left Bank is to enter into contests and tastings to bring attention to the quality of his wines. In other words, he’s not expecting Left Bank to fly off the shelf. It’s intended as a showpiece, not pizza wine (although it would be good with pizza!).*

Nathaniel Rose’s winery is one of the most exciting things happening in Michigan wine right now. I’m a cheap skate but his wines are as good or better than ones from more prestigious and expensive regions and if any wines deserve to push the price envelope in Michigan, Nathaniel’s do. A visit to Nathaniel Rose at Raftshol Vineyards is highly recommended! Joining his wine club is also recommended, so you can get the generous club discount!

*When I spoke to Nathaniel on August 29, 2018 he informed me that Left Bank has actually turned out to be his best seller! Collectors are stocking up. 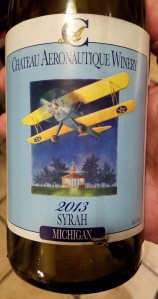 Finish: Tart and oaky, then earthy.

Parting words: Chateau Aeronautique is a part of the cluster of wineries located in and around Jackson, Michigan. Owner/winemaker Lorenzo Lizarralde is known for bold reds and this Syrah is Lorenzo at his best. This wine is bold but never belligerent. The big, spicy flavors are balanced with fruit and earthiness to make for a very food-friendly, enjoyable wine that’s good to drink right now. Good to visit right now is Chateau Aeronautique’s brand new Irish Hills tasting room in Onsted, Michigan on Pentecost Highway between Sand and Evans lakes, south of US 12! 2013 Chateau Aeronautique Syrah is recommended.

Purchased for: $24 (Michigan by the Bottle Tasting Room, Royal Oak)

Finish: Juicy, then oaky with a little tang.

Parting words: Sandhill Crane’s home is in Jackson, Michigan, in a small cluster of wineries including Chateau Aeronautique and Sleeping Bear Winery. They make wine from a mix of estate grown grapes and grapes from other areas of Michigan. They’re known, at least to me, for their reds which are consistantly some of the best in the state. They have a large, swinging tasting room with a restaurant and frequent events. It’s less than ninety minutes from most places in the Detroit Metro area and not far from Ann Arbor and Lansing either, making it a popular destination for those interested in a relaxing Saturday afternoon away.

Syrah’s home is in the Rhöne valley, but tasting this wine left me wondering if its second home could be in southern Michigan. This is cool climate Syrah to be sure, fruity and slightly acidic, but still with the grape’s spicy calling card. The Rhöne vallery isn’t as hot and dry as many people assume anyway. Syrah doesn’t seem to do well in northern Michigan, but in the south and southwest it seems to do better and in the hands of a skilled winemaker like Holly Balansag it can be delicious. We had this wine with chicken tacos and it paired very well. Sandhill Crane Syrah also pairs well with beef and pork. 2012s are going to be hard to find now, but 2016 and 2017 are looking as good as 2012 was or even better. Make sure you give it a good four or five years in the cellar to enjoy it at its best! 2012 Sandhill Crane Syrah is highly recommended.