I don’t do a lot of reviewing of non-alcohol beverages but I thought it might be interesting to do a review of three colas as mixers. Coke, Pepsi and RC are known quantities, so I decided to taste some off brands and one generic. I tasted them by themselves, with bourbon (Very Old Barton 90 proof), and in a Cuba Libre (Olo Silver).

First, Faygo (I bought it in the bottle, can pictured). By itself it has a nice fizz. Syrupy like an old fashioned soda machine where the syrup and 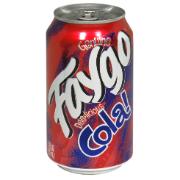 water come out separately. Heavy on the cane sugar, light on the spice. Refreshing but too sweet. In bourbon and cola it’s ok, but doesn’t really bring anything distinctive to the table. The bourbon has plenty of sweetness on its own. Faygo adds nothing but more sweetness. In a Cuba Libre it performs better, but it still adds very little. Meh.

Towne Club Cola: By itself it is fairly bland. The only thing interesting going on is a weird fruity note. Very little in the way of spice, just sweetness and stale fruit cocktail. With boubon, the fruity taste is covered up slightly, but still comes through. In a Cuba Libre, it clashes with the lime in a weird way and becomes very unpleasant. Not good.

Trader Joe’s Vintage Cola: Trader Joe’s is known for having good generics of almost every type of food or drink. Vintage Cola is firmly in that tradition. It’s certainly not as good as Coke or

Pepsi, but it is on a level with RC. Like Faygo, TJ uses cane sugar, not Corn Syrup. Unlike Faygo, TJ’s is caffeine free. By itself, much more spice than the two others tasted. Works very well with bourbon, the spice and cane sugar complements the  corny sweetness of the bourbon. It’s very good in a Cuba Libre too. Fills out the drink very nicely.

Overall, The Trader Joe’s Vintage Cola was is my favorite of the three. Faygo would be second, but might appeal to drinkers with more of a sweet tooth. Coke is still my favorite, but anyone looking to save a few bucks or cut back on the caffeine should give TJ’s Vintage Cola a try.

On the palate: Fizzy and sweet. Dryer and less acidic than a typical grape soda, with even a bit of complexity. Black Current jam, allspice, black pepper, blueberry ice cream.

Finish: Clean with a bit of sweetness.

Parting Words: Soda isn’t normally the sort of thing I drink or review, but I thought I’d give this one a shot since it is a wine grape soda. Besides Pinot Noir, they also make a Chardonnay and a faux brut champagne  and rosé of undisclosed grape varieties. It’s a grape soda, but it’s one with a little style and would be very refreshing on a hot summer afternoon. It also might be a wine good substitute for tee totaling loved ones or older kids. Vignette Pinot Noir Soda gets a mild recommendation.