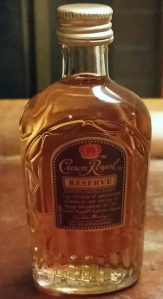 Palate: Full bodied and mildly sweet. Not much going on other than sweetness and a touch of caramel. No oak anywhere in sight.

Mixed: Due to the limited amount I had available of this whisky, I didn’t try Crown Royal Reserve mixed, except for with some soda. It was nearly impossible to taste in that application, but that’s probably for the best.

Parting words: I reviewed the standard Crown Royal a couple years ago and I didn’t like it. I was hoping the reserve would be better. I imagined something more rounded and refined. That is not what I got. Crown Royal Reserve is even worse than Crown Royal. The nose has gone from disgusting to putrid and CR’s grainy character has been replaced with a total lack of any sort of character beyond the garbage (literally) nose. The only pleasant part of drinking this was the delicate, but flavorful finish, but it doesn’t even come close to being worth the silly price.

Don’t buy this. Crown Royal Reserve is not recommended.

One thought on “Crown Royal Reserve”