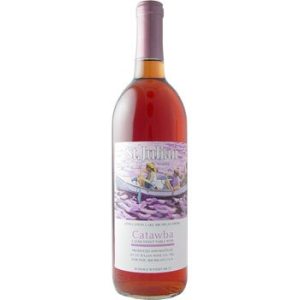 Catawba is perhaps the most American of all wine grapes.  It was one of the most commercial grapes in the 19th century.  Its domain was the eastern U.S.  Ohio’s sparkling pink Catawba was once regarded as America’s finest wine.

The wine industry in the East, and the Catawba was almost destroyed in the late 19th century when the railroads made it possible for California wine producers, growing European grapes, to ship their wines to East.  Many things were tried, but by the time of prohibition, the Eastern wine industry already had at least one foot in the grave.

Starting in the 1970s with the Farm Winery movement, the Eastern U.S. has been able to raise its wine industry from the dead.  But many places in the East, like New York, are now almost exclusively growing European grapes.  The Catawba has found its home in the midwest, though, in many places that are too hot or too humid for the finicky European grapes.

In my mind, St. Julian’s Pink Catawba is the standard.  It is less pink than it is a pale orange.  The nose is tart, with that strong scent and flavor described as “foxy”.  Foxiness is that tangy taste unique to American grapes.  It is that flavor that Americans love in Concord grape juice and grape jelly, and Europeans despise in anything.

On the palate it is much lighter than the nose would have you believe.  Full-bodied and tart, but still sweet, it is above all, refreshing.  Hardly anything tastes better on a hot, sweaty summer night in the midwest than a cool glass of Catawba.  If you don’t like this wine, you’re unamerican.  Or European.

No details on U.S. release or much of anything else, but the Beam 6 grain bourbon is a real item.  The six grains are: corn (i.e. maize), malted barley, rye, wheat, triticale (a rye/wheat hybrid), and brown rice.

Watch this space for more info!

UPDATE: Check out the Chuck Cowdery blog for more info and reflections.